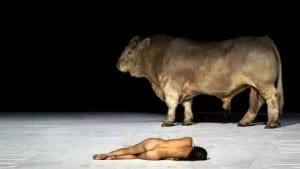 A FIGHT to protect a bull from performing in an opera has broken out in Madrid.

Around 47,000 people have signed a change.org petition to prevent the animal from appearing onstage for 15 minutes every night at the city’s Teatro Real.

Campaigners declare it is ‘humiliating, cruel and unnecessarily stressful’ for the 1,500kg beast to endure ‘constant transport’ during production from May 24 to June 17.

The demand to Spain’s Ministry of Culture and Madrid mayor also expressed the suspicion that the bull was drugged to keep it placid on stage.