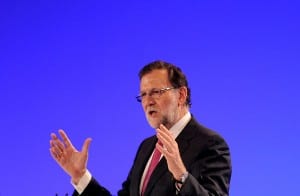 SPANISH political leaders set out on the campaign trail today ahead of the June 26 general election after December’s elections selected no majority government.

The country’s four major parties aim to win a majority outright or form a majority coalition in order to avoid a third round of voting and further political instability.

While Rajoy and Iglesias kept it serious, a Spanish rap artist has made a video about ‘sexy’ Ciudadanos leader Albert Rivera (see below).

“We’ve overcome a period of enormous difficulty… We’re on the right path, but there is still work to do,” he said.

Podemos, who formed a coalition with fellow-leftist party IU in May, did not share Rajoy’s optimism in a separate interview.

“The next government will either include the PP or it will include Podemos… It’s the Socialists [PSOE] who will decide,” said leader Pablo Iglesias.

Not all campaign rhetoric, though, was as serious.

Spanish rap artist Verdad MC has made a parody song and video in support of Ciudadanos.

His spoof song pays tribute to the good looks of Albert Rivera, the centre-right party leader.

The lyrics refer to Rivera as ‘the sexy president’ who ‘calls to Catalunya like Messi, preparing his campaign to take us out of the crisis’.

The rapper refers to himself as ‘the Spanish Kanye West’, although it is not known what Rivera thinks of the tune.