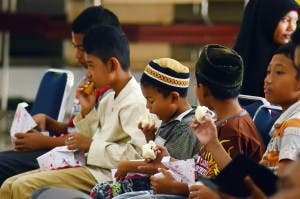 A HEADTEACHER in Melilla has advised his Muslim pupils not to fast during Ramadan as it may negatively affect their health.

These included fainting, migraines and heat stroke during sports activities and games stemming from ‘dehydration or lack of sustenance’.

He recommended parents allow their children to skip the traditional fasting and attached a note from the Islamic studies teacher supporting him.

It read: “Students who have not reached puberty – and all who study here are under 12 – are exempt from fasting under Islamic teaching.”

Some parents from the school, which is majoritively Muslim, were left outraged and described the move as dictatorial.

“It is up to parents and not the school to decide whether they have reached puberty and whether or not they should observe the fast.”