THE UK Foreign Office has issued a warning to British holidaymakers who engage in ‘balconing’. 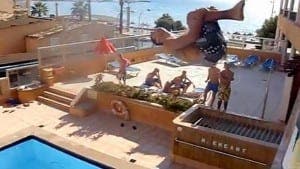 The trend, which sees holidaymakers jump into their swimming pools from their balconies or leap from one balcony to another, killed three in Spain last year.

A 34-year-old is currently in critical condition after suffering severe injury to his spinal cord when he attempted to jump into the swimming pool below his balcony.

Will Middleton, FCO Consular Director for Southern Europe, said: “We have already seen a number of very serious injuries caused by balcony falls this summer.

“We really do urge people to avoid taking risks around balconies, particularly if you have been drinking.

“A momentary lapse of judgement can lead to a lifetime of consequences. So think balcony safety, look out for friends and avoid doing anything that might cost a life.”

Along with the Travel Association (ABTA), the Foreign Office created guidelines that would-be ‘balconing’ enthusiasts should follow.

The re-issued warning is part of a campaign that began five years ago, but the trend has continued unabated.