LABOUR leader Jeremy Corbyn could face a vote of no confidence on Tuesday following the shock Brexit result, while a second Scottish referendum and an Ireland unification beckons.

Labour’s Margaret Hodge and Ann Coffey have submitted a vote for discussion at Monday’s PLP meeting which, if accepted, will be followed by a secret ballots of MP’s on Tuesday.

Corbyn’s opponents are ‘absolutely convinced’ they have the backing of the 20% needed to endorse a leadership challenge and spark a contest.

The challenge is likely to bring divisions that have been simmering since Corbyn was sworn in to a boil. 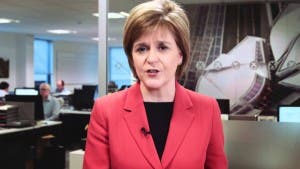 Meanwhile, the Scottish Nationalist Party’s Nicola Sturgeon has vowed to prepare legislation for a second referendum on Scottish independence.

She said at a press conference:

“Scotland faces the prospect of being taken out of the EU against our will and I find that democratically unacceptable…for many people the supposed guarantee of remaining in the EU was a driver for their vote to remain in the UK.”

She added that the SNP’s election manifesto allowed for a second referendum if there was a “significant and material change” to the circumstances of the 2014 vote.

In Northern Ireland, where support for the EU is considerably higher than the rest of the UK, Deputy First Minister Martin McGuinness has called for a border poll on a united Ireland.

The region shares a land border with the Republic of Ireland,  an EU state, and it is unknown how the relationship between the two countries will be affected going forward.

It also receives considerable ‘peace funding’ from the EU, which helps support projects aimed at maintaining the peace following years of violence.

The chaos comes after UK Prime Minister David Cameron announced his resignation as he held back tears.

The final vote in the EU referendum was 52% for Leave and 48% for Remain.