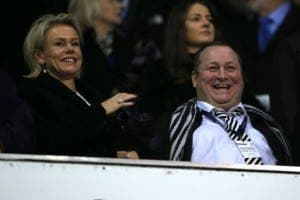 DISGRACED British businessman Mike Ashley has let off steam at a €1.5 million birthday bash for his lover at her Spanish villa.

The party took place at the €15 million bolthole just days after the under-fire Newcastle United owner admitted to paying staff at his Sports Direct stores below the minimum wage.

An army of workers were drafted in to decorate the Mallorca villa with flowers and flat screen TVs so Ashley and his pals could watch England take on Russia at Euro 2016.

A fleet of yachts also docked in the port as Ashley’s millionaire chums joined him to celebrate his ex-wife Linda’s 50th birthday.

The Ashleys divorced in 2002, with Linda walking away with a £50 million settlement. But the duo have since rekindled their love.

A member of staff at the party said ‘the finest champagne, wine and food’ had been laid on as ‘no expense was spared’.

Ashley – worth around €4 billion – was grilled by MPs over allegations including inadequate pay for staff at Sports Direct, poor conditions and compulsory frisk searches for all members of staff.

During questioning it emerged that a woman gave birth in a toilet because she was ‘too scared’ to ask for time off.

In response, Ashley said he would make improvements but added ‘I am not Father Christmas’.

Linda also owns a nightclub and a second villa in Mallorca.