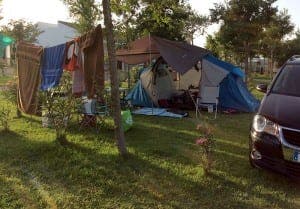 IT’S the summer holidays! I am a teacher so that might be more exciting for me than it is for you because for me it means two months off of school.

Today is our first camping trip of the year.

We first got into camping towards the end of last summer and one of my earlier blog posts documented our first, faltering steps into this new world and the wait from our last camping trip of the year in November to this one has seemed an eternity and so it has been wonderful to get back out in our tent!

However, our camping trips never seem to run smoothly. I’m sure there are many families all around the world who manage to spend relaxing weekends camping with no incident or drama. Unfortunately, our family never does. Take this trip for instance.

This time last night (it’s currently just a few minutes before midnight) we still didn’t have a pitch booked even after trying repeatedly throughout the evening to book one. Despite having tried phoning sites, emailing them and booking online by midnight we still had no confirmed booking. Furthermore, we didn’t even have a car that worked because our car has, in the last two days, developed a temperamental battery which means it will start perfectly one time and then the next time, it could be hours, minutes or even seconds later, it will steadfastly refuse to start and turning the key in the ignition results only in that tell tale clicking sound which surely signals a dead battery. Last night there was only clicking. A lot of clicking. Quite a bit of cursing and shouting too. Consequently as we woke up this morning with our tent and three days worth of camping supplies all packed up in a lifeless car and with no confirmed destination in which to head we felt a little unsure of ourselves. Fortunately, some early morning phone calls eventually sorted the campsite problem and a helpful neighbour and some jump leads eventually sorted the car problem and so soon we were ready to go!

Our last minute booking meant that we had neglected to consult the map to see where we were going. But all was not lost for I had my trusty navigational map app (and by trusty I mean not at all trusty, seeing as the only time it ever seems to work is when I’m being silly with it such as trying to find my own home during moments of boredom when I’m just down the road, but whenever I need it for an important navigational task it will, more often than not let me down completely). Unfortunately, true to form, my navigational, map app let me down completely as we approached the general, but still quite wide area of the campsite and we needed it’s help to locate the place a little more precisely. The app spent forever searching for GPS and then kept freezing or it lost internet coverage completely and the ‘helpful’ blue dot that supposedly signalled our exact location failed to do that at all and instead it zipped around magically from one far-away-from-where-we-actually-were location to another equally far-away-from-where-we-actually-were suggestion. Consequently we lost faith in that and relied on the position of the sun, our inner sense of direction an, rather more reliably, road signs. These seemed to work quite well and we arrived at our destination mere hours after our intended arrival time.

Cue three hours of putting up the tent and the myriad other tasks that are involved in setting up a home under canvas in temperatures of 38 degrees and under a blazing sun that beat down on us relentlessly as we toiled away. There was not a single breeze, not even a slight waft of a hint of vaguely moving air to give us any relief from the overwhelming heat.

Assembling bedroom pods within an airless, greenhouse-like tent is no mean feat, neither is wrestling with double sized inflatable mattresses in an attempt to get them through the rather small zipped doors. Nor is trying to cover these mattresses with fitted sheets while sweltering inside an air-free bedroom pod and attempting to reach the four sheet corners to the four mattress corners while bunny hopping in an attempt to remove your body weight from the sheet in order to best move it around. Nevertheless the tasks were eventually completed, the children were soundly shouted at numerous times as they insisted on repeatedly yelling, “when are we going to the pool?!!!” and before we knew it we were enjoying a celebratory cup of tea before heading off to the pool. 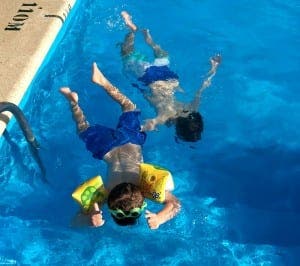 We got to the pool about 7pm which gave us an hour before the pool would close. We may not have prepared enough to read any directions to this place but we had managed to read a few reviews before arriving, a few of which had compared the lifeguards rather unfavourably to dictators. I subtly assessed the lifeguard on duty as we walked past him towards the sun beds and quickly deduced the following; he was undoubtedly male but clearly liked to take care of himself and he had strangely female legs, all smooth, hair-free and tanned. He had very coiffed eyebrows and hair and eyes like a hawk coupled with a love of telling people off. Henry got told off a few times within the hour, as he generally does wherever he is, this time for jumping in the pool (not allowed), jumping in the pool again (still not allowed) and also for not exiting the pool quickly enough when Mr Lady-Legs blew his whistle very shrilly (and quite promptly) at 7.50pm. We joined the line of people vacating the pool under Mr Lady Legs hawk-like gaze with the intention of popping into the campsite shop next to the pool to buy an ice cream. It turned out that our intention was shared by everybody else who had been in the line as we were reunited with all our fellow pool users once again, all squashed up together in the very small shop, jostling for ice creams, air and space.

We did eventually make it out of the shop relatively unbruised, clutching our ice creams ready to walk back to our camp and go about our usual evening routine of post-swim showering, setting up the portable gas cooker and preparing to cook up a riotous feast on our one gas ring. Having eaten our dinner (tonight was the rather deceptively named ‘pasta extravaganza’) in the company of a mixed assortment of air borne bugs it was time to wash up in the dark, get the boys in their pyjamas, escort them over to the toilet block in an excitable, giggley, rather noisy state in order to clean their teeth and then came the usual futile attempts to subdue them back at the tent in the hope of getting them to sleep at some point before dawn.

And that is where I am now. It’s currently 1am. One boy is sleeping in his bedroom pod, one boy is still bouncing around in his. I’m sharing a pod with the bouncing one. I’ve also had more tea than is wise before going to bed in a tent. I don’t think it’s going to be the most restful of nights…