AS the sun hitched a ride on my back and beads of sweat cascaded down my face, I began to think that my plan to conquer Europe’s tallest sand mountain wasn’t such a good idea after all.

With ‘Eye of the Tiger’ playing in my head and the image of Sylvester Stallone racing up the 72 stone steps outside Philadelphia’s Museum of Art, I trudged up the daunting dune at the edge of Bolonia’s stunning beach.

But in true Rocky fashion I conquered my personal ‘Everest’ and made it to the top, lifting both arms into the air with a huge sigh of relief and wishing I’d brought an EU flag to plant in the sandy pinnacle. Well, Spain’s still in it if Britain’s on the way out.

From the top of the mound, the views over the dazzling white dunes fringing the crystal clear waters of Bolonia bay are well worth the effort.

A popular watersports area (like almost everywhere along this coast), Bolonia has long been overshadowed by its ‘hipper’ neighbours at Tarifa, Punta Paloma and Valdevaqueros.

However, the tide appears to be turning, with many ‘domingueros’ (local Sunday beach-goers kitted out with gazebo and picnic basket) banking on Bolonia to escape the crowds.

Eddie Grannel, an Irish waiter who has worked here for the last five years, tells me that the town has gone ‘from Tarifa’s shadows to people’s first choice’.

“The transformation in the last five years really has been amazing,” he says. “The town itself hasn’t changed that much but its popularity has gone through the roof.”

He adds: “When I first started working here I was one of three waiters. Now, in the height of summer, there are up to ten of us rushed off of our feet.”

The impressive ruins of Baelo Claudio are literally a Roman stone’s throw from the beach and well worth a visit.

Free to EU citizens, a slightly awkward encounter with the receptionist ensued as I handed over my driving licence, the day after Brexit. But after a lot of ‘umming’ and ‘ahhing’, I made my case that I am still an EU citizen (for now) and was allowed through.

One of the best-preserved Roman towns in Andalucia, Baelo Claudia boasts an impressive temple, forum, basilica, and fish-salting factory from which it once derived its wealth.

These bleached-driftwood fishing towns give the Costa de la Luz a fresh-and-natural feel compared to the more contrived pleasures of the Costa del Sol, but you don’t have to look far for something more sophisticated: like Vejer, which has styled itself as one of the best-kept hilltop pueblos blancos; and boho chic Tarifa, the epitome of cool, rammed with kooky cafes, funky surf shops and boutiques full of wind-bronzed thrill-seekers enjoying some R&R.

And with the ratio of dreadheads to skinheads set at approximately one to one, my measly man-bun made me feel rather generic for once.

Flip-flops and swim shorts are the established dress code in a town where the easy-living, good-time vibe is infectious.

Tarifa was the first point of the Moorish invasion in 711 AD. But Sancho IV El Bravo, whose statue still keeps vigil below the battlements of Guzmán Castle, wouldn’t recognise the town he reconquered in 1292.

Behind him, another fast ferry to Morocco is departing the port to join the daily traffic jam in the Straits, one of the world’s busiest shipping lanes.

The 14-kilometre crossing to Tangier takes 35 minutes so you can do it  easily in a day, and it’s well worth it for the ultimate out-of-north-Africa experience.

If Tarifa is laid-back-cool by day, the pace hots up when the sun goes down as street performers, crowds of hipsters and beer-guzzling surfers turn out to strut their stuff around the vibrant bars and clubs of Calle Cervantes.

But while tourists continue to gravitate to Spain’s windsurfing capital, the resident kitesurfing cognoscenti  have their own secret places. 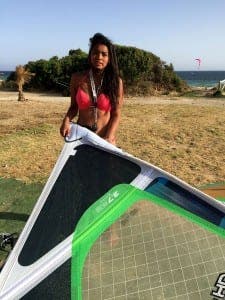 As local kitesurfer Carmen Gonzalez tells me, ‘There is more to life than Tarifa’.

“Tarifa is the play to be in during May and June, when the weather is good, the winds are great and the tourists begin to come in at the weekends,” she says.

“But come July and August, the beaches are rammed, the sea is full of part-time surfers and the town is packed.”

“While this is great for business and great for nightlife, as every bar is packed with friendly people, it is not so great for me. I want my space to kitesurf so, when it gets busy, I go down to Bolonia or Canos de Meca to hang out.

“The entire coast all the way up to Cadiz is stunning, with white sand, blue skies and happy people. You really are spoilt for choice.”

I knew exactly what Carmen meant after my weekend mini-marathon along the ‘coast of light’, which took me all the way to Conil’s Playa de los Bateles, the longest beach of six. It means Beach of Boats, not ‘Battles’ as it sounds although if you want warfare head back into the whitewashed streets for a glimpse into the violent history which blighted the Costa de la Luz for centuries.

Founded by the Phoenicians, it was later inhabited by the Romans, Vandals, Visigoths and Moors, along with the Brits who smashed the French and Spanish Navies at the Battle of Trafalgar in 1805.

But today, all I have to subdue is my fluttering beach towel along this windy coast, in order to sit down and take in the view.

It’s easy to see the attractions of Spain’s ‘wild west’. In both directions, as far as the eye can see, bronzed bodies are self-basting on the beach.

A lot of them are campers who pitch up at El Palmar, attracted by the well-equipped sites fringing endless, soft sandy beaches which stretch west to Torre del Puerco’s panoramic lookout tower and east to Zahora, curving around the Atlantic at  Cape Trafalgar lighthouse where Lord Nelson won the battle but lost his life aboard HMS Victory.

It is actually possible to walk the entire stretch of unbroken sand between Conil and Los Canos de Meca. But  keep an eye out for dress code signs if you’re an unrepentant ‘textile’ – the derogatory term naturists use for people (like me) who wear shorts. The numerous hidden coves certainly reveal more than you bargained for!

‘Canos’, as it’s abbreviated, has its own nudist beach at the foot of a steep cliff. And while this former hippie colony is, fortunately, no longer teeming with women wearing flowers in their hair, it still has that ‘edgy’ laid-back surf dude vibe.

The 15-minute drive from here through the Natural Park of La Brena to Barbate provides a spectacular change of scenery. The road slices through dense pine forest and motorists are treated to an orchestral concert of bird song emanating from the broccoli-shaped trees. 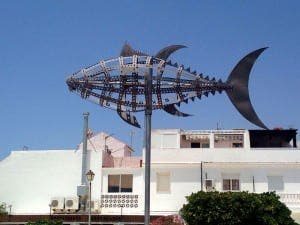 Barbate is a major fishing port, and more industrial than its neighbours. An arty tuna sculpture on the long wide promenade, and a tuna museum, are other testimonies to its key industry.

Along with sun worshippers and watersports enthusiasts, the main beach is also a favourite arena for handball. Sitting down among the masses to watch four games being played simultaneously, it was way more stimulating viewing than watching England’s performance at the Euros!

As the sun began its downward descent to the horizon there was one more port of call to make:  Zahara de los Atunes, famous for its annual May tuna tapas festival. 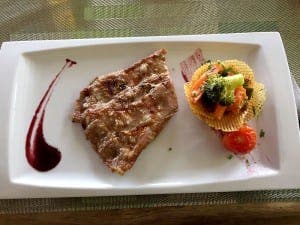 This quaint little town – the most upmarket on the coast – is filled with tapas bars and restaurants, each with their own artistic take on how to serve its namesake fish.

It only seemed right to try some so I ordered up a slab of juicy red tuna steak and ate it watching moonlight on water – a fitting finale to a weekend discovering the peachy beaches of the Costa de la Luz.