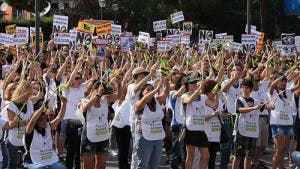 AN animal rights party in Spain has won a record number of votes in the country’s June elections.

Although it is not enough to enter parliament, it is a boost for the group who have long been campaigning for the banning of bullfighting.

“This support proves again the unstoppable growth of the single party that bears the flag defending the animals,” PACMA said.

Spain remains divided between those who support the abolition of the sport and those who want to uphold the age-old tradition.

PACMA has proven instrumental in making authorities in Castilla y Leon to ban the slaying of bulls during festivals, and in persuading Valencia to ban flaming bull runs, which see balls of wax attached to the bull’s horns being set a light before they are released to run through the streets.

The group appears to have amassed a growing support base, more than doubling the 102,000 votes it received in the 2011 elections.

The group said: “These incredible results make the Animalista Party into an unstoppable political force , which grows without measure regardless of the situation and the political context.”