THERE may be a puma on the loose in Estepona. 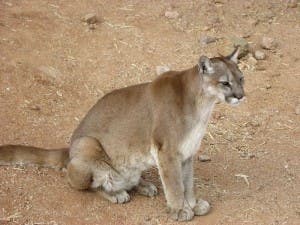 Some speculate that a big cat may have escaped from an illegal private collection after a video showing the large feline appeared on the Internet.

The video, posted by Daniel Kelly on social media, appears to show a large cat-like animal walking around in scrubland close to Estepona.

The animal appears for a few seconds before disappearing into the trees.

It is believed the creature is a puma, also known as a cougar or mountain lion, weighing approximately 30-35 kilos.

The possibility that it is an Iberian lynx has been ruled out since the video shows a feline with a long tail.

The Guardia Civil and animal protection think it may have come from a private residence and been released or escaped, as local wildlife parks do not house such big cats.