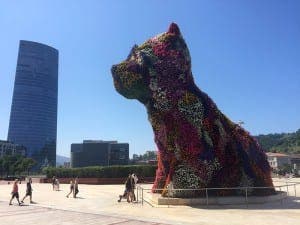 TOWERING 165 metres over one of the country’s most populated metropolitan areas, the Torre Iberdrola boasts 40 floors, 22 lifts and the ever essential helipad.

Designed by Argentinian architect Cesar Pelli, the financial and commercial epicentre is the tallest building in Bilbao, and has been praised for its elegant, sober lines and its use of glass with travertine and metal.

Built in the Abandoibarra district, which has undergone huge renovations, the skyscraper houses mostly office blocks.

But after a failed project by Spanish bank ABBA to build a hotel across the first eight floors, there is now also an auditorium that can hold up to 200 people.

It is the first building in Europe to obtain the LEED Platinum certification for its sustainable design – the highest rating achievable from the US Green Building Council – reflecting the city’s commitments to sustainability.

The imposing structure is home to almost 40 global companies, including British Telecom, KPMG, Nespresso, Canon, PWC and of course, the Iberdrola headquarters.

The presence of global companies is largely thanks to the city’s heavy industrialisation in recent years, which has led to it becoming the second-most industrialised region of Spain behind Barcelona.

Mirroring London, it has become a vigorous service city, and is still experiencing an ongoing social, economic, and aesthetic revitalisation process.

This began with the iconic Guggenheim Museum and continued with, in addition to the Torre Iberdrola, the airport terminal, rapid transit system, tram line, and the multi-purpose venue Azkuna Zentroa.

As the Basque economy continues to grow, so too will Bilbao’s development, with the Torre Iberdrola as the epitome of its successes.