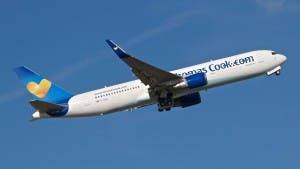 A PASSENGER jet en route to Spain had to make an emergency landing after a bird was sucked into one of its engines.

The Thomas Cook TCX47MG flight from Glasgow to Mallorca left at 6.17am, but was diverted to Manchester around half an hour later following the incident.

It was able to land safely despite a bird being suck into one of the Airbus A321’s engines.

Passengers have been transferred to another flight.

Fire crews surrounded the flight as it landed as a safety precaution.

Passenger Kieran Houston, 20, from Glasgow, said there was a loud noise on the plane shortly after take off.

He said: “We took off and there was a loud rumble and vibration.

“The passengers were worried, but we are just glad we got here safe.”

A Thomas Cook spokesman said: “Passengers will be transferred to another aircraft in Manchester and will continue their journey with minimal delay and we are very sorry for any inconvenience.

“The aircraft (G-TCDN) will be examined by our maintenance experts at our main hangar, which is at Manchester Airport.

“Safety is always the highest priority in aviation. Birds entering jet engines is something that does occasionally happen throughout the aviation industry and our crews train regularly to handle it.”