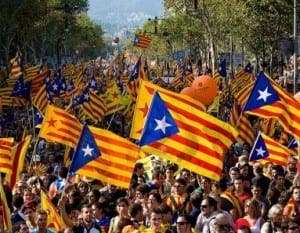 PUBLIC support for Catalan independence has grown as a result of the UK’s vote for Brexit, according to political experts.

The number of Catalonians wanting independence is now at an all time high of 48%, compared with just 42% wanting to remain part of a united Spain, according to an El Pais survey.

It marks the first time that a vote to split from Spain is in the majority.

Political analysts are now putting the surge in support for Catalan independence down to Brexit.

“Brexit has been the force for the EU to reveal its pragmatic side,” Albert Royo, secretary general of the Public Diplomacy Council of Catalunya said. “Brexit has shown the EU as willing to maintain a relationship with Britain despite its decision to leave.

Alex Trelinski - 28 Jan, 2023 @ 08:30
THREE people were injured on Friday after a butano gas cylinder explosion in Godelleta, Valencia Province. The cannister was set off by a man suffering...