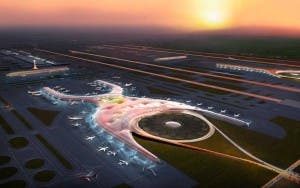 A FUTURISTIC terminal for Mexico City airport could be built by Spain’s Ferrovial.

Debt-laden Mexican builder ICA is in final talks with the Spanish giant after it considered scrapping the joint bid plans altogether.

The two companies are in talks with Dragados, a unit of Spain’s Grupo ACS, and Monterrey-based GP Construction.

Opening by 2020, it would anchor a new Mexico City airport and cost around €11 billion.