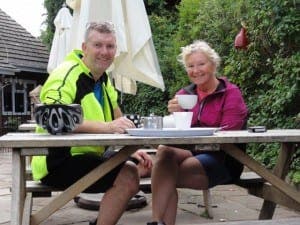 A BRITISH widower has cycled from the north of England to the south of Spain in memory of his wife.

Visiting some of Julie’s favourite places in the UK and Spain on his journey, Keith returned to the Benicassim beach where his wife last walked on sand and swam in the sea.

“My main intention in setting up the foundation, and embarking upon my ride back to Julie’s beach, was to keep Julie’s memory alive,” Keith, 49, told the Olive Press. “Raising funds to help people living with cancer can only be a good thing, and I am so grateful to everyone who has made a donation to the foundation, no matter how big or small.

“I am also extremely grateful to Spain for welcoming me with open arms, and to the Spanish people who I met during my ride, who took such an interest in what I was doing and in Julie’s story.”

The foundation will be donating approximately €1,800 to Wirral Hospice and the remainder will be divided between four UK cancer charities.