THE answer to one of Spain’s biggest mysteries could be about to end as a new search for poet Federico Garcia Lorca begins near Granada.

Digging resumed this week for the body of the murdered Republican, who was executed by Franco’s troops in 1936.

A team from the Regreso con Honor association is excavating land near Alfacar, where they believe Lorca and others may be buried.

The first phase of the operation, led by investigator Miguel Caballero, is expected to last two weeks.

Using heavy machinery, the team will clear earth placed on the site when it was earmarked to become a football pitch.

The next step will involve searching nearby wells for evidence of bodies dumped at the site.

It is believed Lorca, Republican teacher Dióscoro Galindo two bullfighers Francisco Galadí and Joaquín Arcollás may have been shot at the same time and buried together.

The current dig has been funded by donations from Spain and abroad, including the UK. 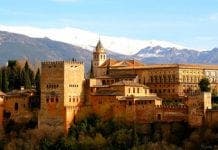