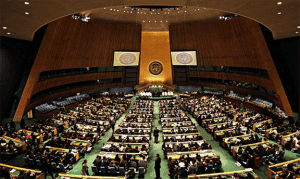 GIBRALTAR has been listed as a priority for Spain during the 71st United Nations General Assembly.

Spain’s Ministry of Foreign Affairs said in its statement at the beginning of the session that it would defend the principle of territorial integrity and application to Gibraltar.

Earlier this month, Spanish foreign minister Jose Manuel Garcia-Margallo said he would brief EU ministers on joint-sovereignty of the Rock.

He then claimed Brexit represented the best opportunity since the 1713 Treaty of Utrecht for Spain to regain control of the British territory.

Gibraltar politicians, including first minister Fabian Picardo, have since criticised Margallo for having a ‘ridiculous obsession’ with claiming sovereignty of the Rock.

Spain’s other priorities include working on international peace, migration and humanitarian challenges, human rights, sustainable development, and the election of a new Secretary General and UN reform.