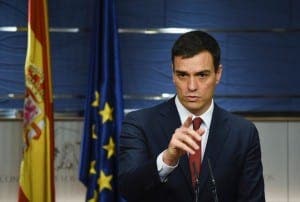 SPAIN’S PSOE is in crisis following yesterday’s ‘coup’ attempt which saw half of its leadership resign.

Seventeen party executives handed in their resignations in a bid to oust incumbent leader Pedro Sanchez.

The PSOE scored historically low results in the December and June general elections and received a drubbing in last weekend’s regional votes.

Paired with two previous resignations, the number of party leaders who have quit is now 19 out of 35, more than the majority.

He said that under party rules, an extraordinary meeting of grassroots members must now be called to elect a new executive, and that they will decide on whether they want their leader to remain.

“The grassroots members are those who must decide what project and leadership they want,” Luena said.

“Tricks and coups don’t have their place here.”

He added: “The Socialist party leader is its secretary general, and the PSOE’s secretary general – elected by party members – is Pedro Sanchez.”
Several PSOE ‘barons’ have criticised Sanchez for voting against the right wing coalition offered up by Mariano Rajoy earlier this month.

The barons and other party insiders argue that if he had allowed Rajoy’s right wing government to take power, the PSOE could go into opposition and build up strength again.

Sanchez is now trying to form his own coalition with far left anti-austerity party Podemos.

Former Socialist Prime Minister Felipe Gonzalez has since accused Sanchez of ‘tricking’ him.

“He told me he would go into opposition, that he would not attempt any alternative government,” he said.

“I feel frustrated… as if I had been tricked.”

Sanchez is hoping that the fact that most grassroots members do not want a government led by Rajoy will play in his favour.