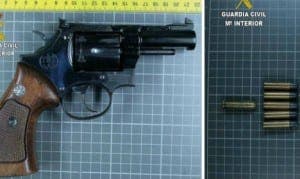 A SPANISH grandfather has been arrested in southern Spain for holding his entire family hostage at gunpoint.

The 38-year-old, from Almeria, kept his son, 18, daughter, 10, the son’s 15-year-old girlfriend and their young baby in his home against their will.

He was reportedly trying to get them to divulge the whereabouts of his estranged wife.

It is not known how long he kept the family hostage, but he used a loaded pistol to threaten them and would not let them leave the house at the same time.

Authorities were only made aware of the kidnapping when his daughter went to the local police station after escaping.

They raided the home and discovered a fully-operational handgun loaded with 60 rounds of ammunition.

The unnamed grandfather is awaiting trial.