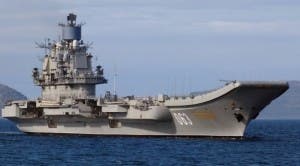 RUSSIA has withdrawn a request to refuel three warships in Spain following concern among NATO allies that they could be used to target civilians in Syria.

Spain had been urged to abandon the idea by the British, who had raised concerns over its decision to allow the battle carriers to dock in the north African enclave of Ceuta.

British Defence Secretary Michael Fallon said he would be “extremely concerned that any NATO member should consider assisting a Russian carrier group that might end up bombing Syrian civilians.

“NATO should be standing together,” he said.

Spain revealed it had granted permission last month for the three Russian ships to dock in Ceuta between October 28 and November 2.

They said it was in line with its long-standing practice of allowing Russian Navy ships to visit its ports.

Spain’s Foreign Ministry then asked the Russian Embassy in Madrid for clarification after concerns were raised that the ships could support attacks on the Syrian city of Aleppo.

Russia responded by withdrawing the request.

“The Russian Embassy in Madrid has just informed us that it is withdrawing the request for permission for stopovers for these ships and these stopovers have therefore been canceled,” the Spanish foreign ministry said.

The Russian embassy in Spain also confirmed that Moscow had withdrawn a request but  gave no reason for the change of mind.

NATO is monitoring the eight-strong carrier battle group, currently on its way to the eastern Mediterranean.