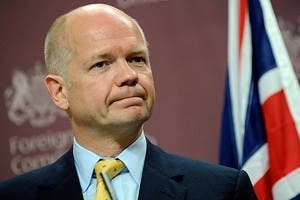 WILLIAM Hague has warned that Spain could hold the U.K. ‘hostage’ over Gibraltar in any post-Brexit trade talks.

The peer revealed his fears that Spain could use its veto to block any Brexit deal, with ex-foreign secretary Jose Manuel Garcia Margallo demanding joint sovereignty over the Rock.

Hague said: “The UK has to assume the negotiations will end in two years because it could be held hostage by the demands of one member state refusing to extend the negotiations.”

Hague told an audience of manufacturers it would be ‘a miracle if everything could be wrapped up in two years’ and that ‘transitional arrangements will become increasingly important for the UK and the rest of the EU as well’.

If no trade agreement is struck between the U.K and the EU by 2019, Britain will revert to World Trade Organisation (WTO) terms.