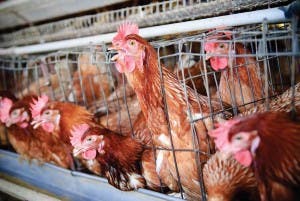 EUROPE’S largest discount grocery chain has announced it will become 100% cage free for eggs by 2025.

Lidl will ensure all its eggs and products with egg ingredients, including packaged and baked goods, will have only come from hens who are allowed to roam free.

The vast majority of egg-laying hens are confined in battery cages of an average 67 square inches – less space than a single sheet of letter-sized paper.

Unable even to spread their wings, they are among the most intensively confined animals in the food industry.

Lidl’s decision to boycott cage farming comes after lobbying and consultation with animal rights groups the Human League and Open Wing Alliance, who have garnered similar commitments from Sodexo and Aldi.

The German supermarket chain’s new policy will affect more than 10,000 stores in 27 countries worldwide, including Spain, where it has over 500 locations.

It will also be one of the first major corporate cage-free policies to be in operation across eastern Europe, including Poland, Bulgaria, Romania and Slovakia.

Lidl is one of the world’s fastest expanding supermarkets, operating in 30 countries, with stores in Serbia and the east coast of the US to be in operation by 2018.