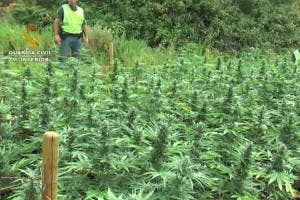 THE Guardia Civil has busted a mammoth cannabis farm in the Serrania de Ronda.

Spanish cops uncovered 9,306 plants weighing a total of 122.2kg in the Genal Valley.

The investigation was part of Operation Emerita, which began last July.

Police discovered packaged marijuana ready to hit the streets and 30kg of buds.

Seven have since been arrested for involvement in the ring, charged for cultivating and distributing drugs and being involved in a criminal organisation.