THE Ukrainian president and his allies have come under fire for keeping their Costa del Sol pads secret from the authorities.

Petro Poroshenko, who has ruled the eastern European state since 2014, failed to declare his €4 million villa in Estepona when updating his searchable asset declarations.

The publicly available records are part of a new drive by the International Monetary Fund to improve transparency and root out corruption.

But an investigation by Ukrainian TV network RFE/RL has discovered his Spanish-registered company Feruvita S.L. bought the 1,254sqm villa when he was head of the Council of Ukraine’s National Bank in the summer of 2008, allowing him to keep it off official records.

Within a short drive of Poroshenko’s pad are villas belonging to Ihor Kononenko, fellow government official and one-time business partner to Poroshenko, and Oleh Hladkovskyy, deputy secretary of the Ukrainian National Security and Defence Council.

They both also used companies to effectively hide their assets. 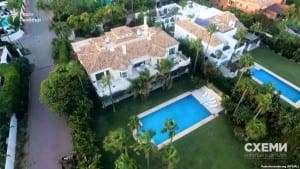 While it is not illegal to control assets through companies so long as they are used for purposes related to the business, anti corruption campaigners argue that failing to disclose such properties ‘makes a mockery of the duty to report’ and raises questions about how they were obtained.

Daria Kalenyuk, executive director of the Kyiv-based NGO Anti-corruption Action Centre said: “If the villa is not used for the company’s commercial activity, it should have been declared.”