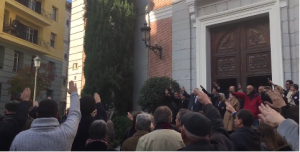 PRO-FRANCO fascists have taken to the streets in Spain to salute the dictator on the 41st anniversary of his death.

Some 200 people gathered in Madrid’s Plaza Oriente yesterday as they raised their right arms and sang the Cara al Sol anthem.

Organised by far-right groups The Spanish Catholic Movement and the Falange, protesters were seen holding placards with phrases like ‘Make Spain Great Again’ – a play on Donald Trump’s campaign slogan.

A gay homeless protestor, Lagarder Danciu, was violently assaulted by a group of the fascists who kicked him repeatedly and hit him around the head until police intervened.

Danciu had held up a sign reading ‘Franco asesino’ – Franco killer – in a counter-protest.

Masses, organised by the Francisco Franco Foundation, were also held across Spain to honour the dictator, while others organised marches.