WHEN you build a house from scratch that’s based on your own ideas, you end up with what I suppose you might call your “dream home”.

That’s what I did with this little house in Jerez de la Frontera, although it’s not something I ever dreamt I would do. I did see what I wanted to do with it, almost from the first moment I saw it.

But the process was anything but dreamlike, unless you count those dreams where you wake up screaming. It’s said that moving house is one of the most stressful of all urban experiences, so imagine what knocking one down, building a new one and then moving into it feels like. Stressful isn’t the word. I don’t think I’d ever want to do it again.

if it’s something you’re thinking of doing, my advice to you would probably be – forget it. But if you’re hell bent on it, it might be worth me writing down a detailed list of do’s and don’ts, based entirely on the many mistakes I made and things I got wrong.

The first one on the list is probably the most essential, though I do realise it’s easier said than done.

My Spanish is enough to get me around, but nowhere near good enough to handle anything complex or technical. For instance, I’m convinced I’m paying way over the odds for my mobile phone tariff, but there’s no point going in and out of the various suppliers’ shops to get more info, as I’d have no idea what they’re saying.

Having fluent Spanish would have been especially helpful when the architect presented me with the “presuspuestos” – the specifications for the project. 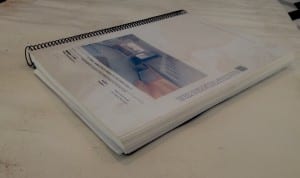 It’s a book as thick as an old fashioned telephone directory, incredibly detailed, ridiculously technical. The most I could do was look at the pictures.

But it also serves as the bible, containing words of wisdom that all must follow. Set in stone, as they say. I’ve lost count of the number of times I disputed some aspect or other with the architect and builders and they ended up shrugging their shoulders and saying “well, that’s how it is in the presuspuestos.”

Conversely, there were several occasions when they said “that’s not in the presuspuestos” and I discovered, to my alarm, that something I thought was covered in the overall budget was in fact an additional cost.

If your Spanish isn’t the best, it might be an idea to find someone who speaks it perfectly to help you. But they’d need to have an awful lot of patience and time to spare.

The need to be on-site might sound blindingly obvious, but it’s not how I started. I was living in Bangkok when I bought the place in 2013. I knew my work contract there would end at some point (actually it ended abruptly and a lot sooner than expected, but that’s another story) and I’d be coming back to Europe.

So I came to Jerez, a town I know and like very much, snooped around for a week and found this place at a bargain 26,000 euros.

My original plan was to try and re-build it by remote control from Thailand. I met a builder and an architect in Jerez, told them what I wanted to do, then waited. And waited. For a year, nothing happened. Except I got friendly with the builder and we still go for a beer now and then.

It wasn’t till I moved here and rented a flat in early 2015 that I was able to really get it going.

Sorry folks but it’s true, same as it is in most places. When the estate agent showed me this place, one of the first things I asked was, could I build an upper storey on the existing structure? Yes of course, he said, no problem. Which wasn’t untrue but wasn’t entirely true either. I’ll come back to that in a minute.

Much more seriously, there’s a question over the ownership of the patio that separates my place from the rest of the casa de vecinos. Fortunately, I know now that it can be resolved, but the estate agent can take no credit for that.

I raised it with him several times before I bought the place. He kept insisting it was fine, he had a certificate that guarantees that I own it outright and would be happy to let me have it.

And has he? Take a guess.

4. Don’t believe the budget either

You’ll be given an estimate before work starts. Never forget that an estimate is all it is; the final cost will almost certainly be higher.

Here are some of the things that came out of nowhere to bump up the cost of my project:

The original building had a toilet, but it turned out to be for display purposes only. They had to lay a new sewage pipe and connect it to the main house.

As I related in an earlier blog, the provincial council at Cadiz ordered an archaeologist to be on site when the builders dug out the foundation. They found four skeletons which they took away. I had to pay for it.

The builders also realised there was a hole under the patio which needed filling. By this point I was starting to sweat over how much it was all costing and was in favour of postponing that. But the architect pointed out that, if I did, I’d have to re-apply for planning permission and the archaeologist would have to pay another visit.

OK, I said, go ahead and get it done. And talking of planning permission….

5. Be prepared for a long, hard battle with the ayuntamiento

The number of times you’ll have to go back and forth to the planning office will, I promise, drive you mad.

Once we’d presented all the plans, filled in all the forms and ticked all the other bureaucratic boxes, we had to wait weeks for the green light. I got so tired of it, I went on the council’s own Facebook and Twitter pages and told the world they were jerking me around. Lo and behold, a guy called me the very next day to apologise and we had the permission a few days later.

But there’s more. They said that the new upper floor couldn’t be exactly the same size as the lower. They apply a mathematical formula and tell you what the maximum size of the structure can be. 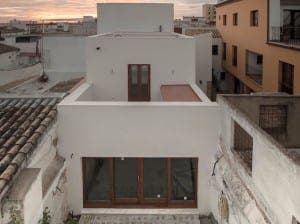 I really don’t want to turn this into an angry expat rant, but I just don’t get it. It’s ludicrous. Every other building in the town has two floors the same size, so how come mine had to be different? If you can explain it, please do.

The upshot is there’s a bedroom upstairs with room for a bed and a wardrobe and that’s it. Then there’s a balcony that’s a bit bigger than it needs to be and a big blank space at the back, which I don’t yet know what to do with. I’ve had it all tiled. It might become a bathroom but that’s another planning issue, or maybe a conservatory. Or I could open a sushi bar. Dunno.

6. Ask questions while you can 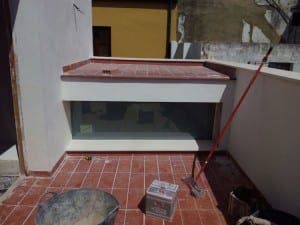 A couple of things weren’t quite the way I wanted them, but by the time I realised that, it was too late. The balcony is paved and covered with typical local brown tiles. They’re OK, but I might have done something different if I’d thought of it. But I went round one day to have a look and there it was, done and dusted. That’s how it was in the presuspuestos mate.

I also had to get sliding doors custom made for the front. I’m really happy with them but the handles are gold coloured and all the other metal in the place, like the staircase, is black. I’d like to spray the handles black too. I’ll get round to it eventually.

7. Take up meditation, or take a pill, or something 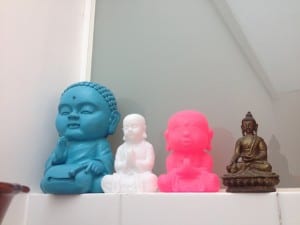 A couple of people have commented on how calm I’ve been throughout this. They should have seen me when I lost it, which happened more than once.

Several times I got into an angry exchange with the architect. I’d feel bad about it afterwards and apologise. He took it amazingly calmly and said just about every client he’s ever had freaks out at some point or another.

So it seems like losing your marbles is par for the course. Not a lot you can do about it. Keep calm and carry on, as I think I’ve heard somebody say.

I’ve been in the place for a few weeks now, starting to relax and enjoy it. It’s an amazing feeling to look around and think wow, this is mine.

There’s still quite a bit to do, so I’m not quite ready to get Homes & Gardens round, or show you the glamour shots. But the kitchen is pretty much finished. Here’s a series of pictures that show it coming together. See you next time.