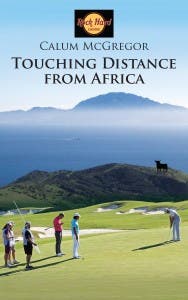 AN EXPAT whose life was turned around by golf has revealed his personal journey in a new book.

Sotogrande-based Calum McGregor, who said the sport helped him battle his ‘demons’, has released Touching Distance From Africa.

A true love story, it follows the quest of McGregor, now a golf tour manager, to find a soulmate.

Available both in print and as an e-book, it is the third in his series called Rock Hard Caddie, which deals with different episodes in his life since he moved from South Africa to Spain.

“Golf has always been one of my biggest passions in life,” explained McGregor.

“The tranquil peacefulness of the outdoors and the high level of concentration distracted me from the demons that occupied my head from an early age.

“So I chose to devote my attention to creating a path for myself in the world of professional golf and writing about it.”

Touching Distance from Africa is available on Amazon for €3 as a download or €9 for a physical copy.