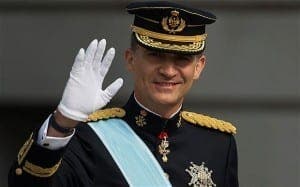 SPAIN’S King Felipe VI will make an official visit to Saudi Arabia next week, with the sale of five military ships on the agenda.

He will be accompanied on his January 14th-16th visit by Foreign Minister Alfonso Dastis and Public Works Minister Inigo de la Serna, the Foreign Ministry said.

The visit has already been re-scheduled twice: it was originally planned for February 2016, but cancelled after 47 people were executed by the Saudi Kingdom. A subsequent trip scheduled for November 2016 was again delayed by the death of the Saudi King’s brother, Prince Turki bin Abdel Aziz.

The visit is expected to coincide with the Saudi purchase of five warships from Spanish company Navantia for several million euro.

However, the deal has been criticised by some, who fear that the ships will be used in the Yemen conflict, in which over 7,000 have been killed.

One of the Spanish military industry’s top clients, Saudi Arabia purchased €546 million worth of equipment in 2015 alone.