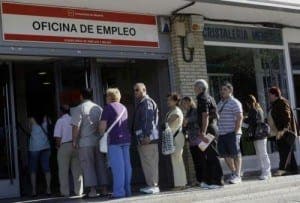 UNEMPLOYMENT in Spain was reduced by almost half a million in 2016, new figures have shown – but a majority of the jobs are ‘precarious’.

Some 86,849 people found work across the country in December. Combined with the rest of year, it means the jobless rate has fallen by 390,534.

It represents a 9.54% drop from 2015 and the fourth consecutive year of rising employment.

But Spain’s most influential union, the UGT, complained that many of those moving out of the jobless queue had only been able to find employment with ‘precarious working conditions’.

“In December, just four out of every 100 contracts signed were long-term and full-time,” it said in a statement, “Economic and social inequalities continue to increase.”
Mariano Rajoy’s conservative government has come under fire for the unstable and temporary nature of the new jobs, despite the jobless rate falling consistently from the 26% seen during the crisis in 2013.

Alex Trelinski - 24 May, 2022 @ 16:15
A drugs gang including British citizens who took suitcases of narcotics to the UK and across Europe, has been arrested by the Policia Nacional. Police...