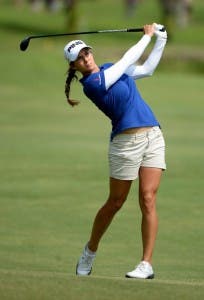 ONE of Spain’s top female golfers has changed her trainer to up her game in 2017.

Azahara Muñoz has left Sevillano Marcelo Prieto for Bob Lohr, an American professional and former winner of the PGA Tour.

But she revealed in a blog that the decision was mostly taken by Prieto, who felt the change would be better for her game.

“We parted after the Spanish Open”, said Muñoz, who thanked Prieto for his work.

“It was a very difficult decision.

“In fact, it was more of his idea than mine, and that only shows the honesty he has.

“He told me that he thought it was the best thing for my career, that I needed fresh air.”

Muñoz finished 2016 in 50th place in the global Rolex Ranking.