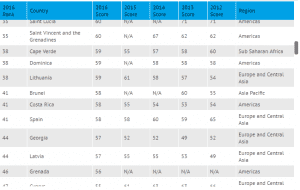 SPAIN remains one of Europe’s most corrupt countries, according to the annual Corruption Perceptions Index.

The country came joint 41st with Brunei and Costa Rica, and was ranked below the United Arab Emirates, Qatar and Botswana.

Spain has dropped 24 places since being ranked 65 in 2012, but it has remained one of the worst performing in Europe.

Transparency International said that no nation in the world is doing enough to fight corruption.

“There are no drastic changes in Europe and Central Asia in the Corruption Perceptions Index 2016, with only a few exceptions. However, this does not mean that the region is immune from corruption. The stagnation does not indicate that the fight against corruption has improved, but quite the opposite,” the think tank said in a statement.

“Last year in Denmark, the top country on the index, 20 members of the Danish Parliament (11 percent of 179 members) did not declare their outside activities or financial interests in their asset declarations.”

It added that it is ‘highly alarming’ that even the best-performing countries in the EU aren’t immune from corruption scandals.

Of the lower performing countries, the report said: “The lower-ranked countries in our index are plagued by untrustworthy and badly functioning public institutions like the police and judiciary.

“Even where anti-corruption laws are on the books, in practice they’re often skirted or ignored.

“People frequently face situations of bribery and extortion, rely on basic services that have been undermined by the misappropriation of funds, and confront official indifference when seeking redress from authorities that are on the take.”

Somalia was at the very bottom of the index for the tenth year in row with a score of 10. The full ranking can be seen here: http://www.transparency.org/cpi2016