ASHYA KING is cancer free and back at school in Spain, according to his father.

The news comes almost three years after Brett and Naghmeh King took their son out of a UK hospital and travelled to Prague, in the Czech Republic, for proton therapy treatment.

The move sparked an international manhunt as NHS doctors said the treatment would fail and that Ashya, five at the time, was ‘too ill to go’. 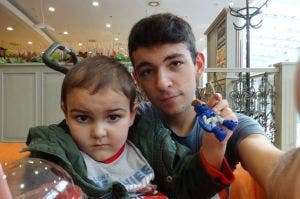 The parents initially fled to Velez-Malaga in Spain, where they were arrested and held for 24 hours.

They were soon released as Ashya had to be taken to a local hospital for emergency treatment before a court order allowed them to travel to Prague.

Dad Brett now claims the brain tumour has disappeared and that Ashya is very well and happily back at school.

The manager of Prague’s Proton Therapy Centre Iva Tatounova said: “We are in a regular contact with Ashya King’s parents.

“According to the last news from them the boy is very well.”

Ms Tatounova added: “In Spain, where he lives with his parents and other siblings, he goes to school every day, he continues in rehabilitation and goes to a logopedist.”

NHS chiefs have since confirmed they are looking to bring proton beam treatment to the UK.

While it does not provide the treatment, it will pay for children to travel abroad to receive it when necessary.