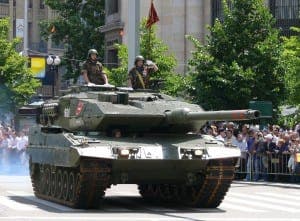 SPAIN will send troops to Latvia as part of a NATO mission which Russian officials have labelled a ‘threat’.

The mission to ‘strengthen Latvian security’ will include a Spanish contingent of 350 troops, six tanks and a further 14-16 armoured vehicles.

This will be the first time Spain has sent  Leopard 2e tanks out of the country.

It comes after NATO members agreed on the ‘biggest reinforcement since the Cold War’ at a summit in Warsaw in July.

The mission has increased tension between Russia and the West.

“This deployment is, of course, a threat for us,” said Russian Deputy Foreign Minister Aleksey Meshkov, “the steps by NATO gravely increase the risk of incidents.”

The 1000-strong battalion based in Adazi will also include troops from Canada, Italy, Poland, Albania and Slovenia.