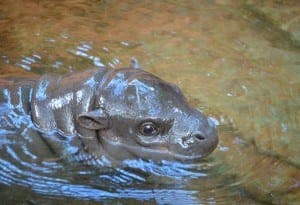 A RARE pygmy hippo has been born at a Costa del Sol zoo.

The unnamed female calf can now be seen splashing around in the waters of Bioparc Fuengirola, which is leading the way in a worldwide project to save it from extinction.

Ten times smaller than the common Nile hippo, the adorable mammal has been classified as threatened since 2006 by the International Union for Conservation of Nature.

It now only exists in the wild in isolated pockets of the Sierra Leone, Ivory Coast, Liberia and he Gulf of Guinea.

It is the fifth baby to be born at Bioparc, one of only three Spanish zoos involved in a conservation breeding project which hopes to eventually to reintroduce them into the wild.

Alex Trelinski - 17 Aug, 2022 @ 12:45
A 43-year old tourist has been arrested by police in Malaga after installing motion-detector cameras to record people urinating in side streets during the...