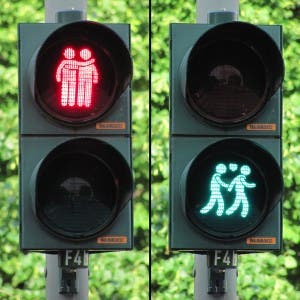 Ten lights at pedestrian crossings in the centre of San Fernando de Cadiz show two women or two men holding hands, with a heart in between.

Local councilor Anna Lorenzo said the move was intended to ‘normalise the fact that there are different kinds of couples among residents’.

Similar lights were introduced in London’s Trafalgar Square for the 2016 Gay Pride festival where they are now a permanent fixture.

Anthony Piovesan - 3 Dec, 2022 @ 14:15
A retired British expat who applied to get his pension on his 65th birthday from a social security office in Spain was denied, and...