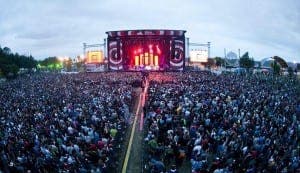 And with it comes the promise of the start of Spain’s sun-kissed music festival season.

The Olive Press has scoured the land to find the must-attend events in 2017, so grab your cervezas and sombreros and begin the party.

It may be best known for its sherry, but Jerez de la Frontera will get everyone into the festival spirit this month.

Hip-hop talent Mala Rodriguez, flamenco-rockers Fuel Fandango and rappers La Raiz are just some of the big names who will play at this welcoming local event.

Discover the infectious sounds of some of Spain’s most popular alternative acts. Alt-rockers La Bien Querida, Catalan-singing Manel and Standstill are among those set to play.

Festival Interestelar Sevilla , Sevilla, May 19 to 20

Enjoy one of Andalucia’s most beautiful cities to an awesome musical soundtrack before it is overcome by its notorious stifling summer heat.

The line up boasts a mountain of top class Spanish groups such as Love of Lesbian and Leon Benavente.

A free sister event to the renowned British Womad (world of music and dance) festival, it was founded in 1980 by Genesis frontman Peter Gabriel. He wanted to introduce music lovers to sounds from around the globe.

Expect memorable performances from musicians specialising in genres you have never heard of before.

The cool kids of Europe will descend on a industrial estate to celebrate the best avant garde bands in the world without getting their shoes dirty.

Aphex Twin, Arcade Fire and Van Morrison are just three of the enviable list of names on the cartel.

Travel the world through sound at this boundary-pushing gathering in a unique venue.

Tickets: £35 for the main headline event.

British and Spanish artists will bring the house down at this early summer bash.

Founded in 1994, Sonar is one of Europe’s premier electronic showcases.

Celebrating its 10th birthday this year, this indie festival is small in lineup but big in quality. Discover some of the best cutting edge European bands such as Basque group Belako and  Norway’s Airbag.

Twisted firestarters Prodigy will bring the heat to one of the hottest events on the coast.

The British ravers are the headline act at the three-day event, which will also include performances by a wealth of top class Spanish artists spanning electronica, rock, reggae and more.

Depeche Mode and The Killers are just some of the musical heavyweights heading up this year’s stellar international festival, alongside Die Antwoord, Justice and Brian Wilson of the Beach Boys.

Take advantage of the festival’s fantastic location to explore the modern city centre at the same time.

Previous events have included Cypress Hill and the Asian Dub Foundation, while this year will bring top Spanish acts SFDK, Natos y Waor and Estricnina to the stage.

Dance until you drop in one of Costa del Sol’s best-known party towns at this beats-heavy bash. Nervo, Borgore and Axwell Ingrosso are headlining the bill.

Want a lineup to rival the best British festivals without the mud and rain that comes with them?

With Red Hot Chili Peppers, Kasabian, Foals and Liam Gallagher topping the bill, beach-side Benicassim could be the perfect choice.

Elton John is the big booking at this glitzy month long showcase in his only 2017 concert in southern Spain. The Bootleg Beatles and Anastacia are among the other performers who will grace the stage of the Starlite venue.

Celebrate the height of summer on the Rock with one day of back to back tunes and dancing.

So far four acts have been announced, including Austrian duo Who Knows, English Jax Jones and Gibraltar’s own award-winning DJ Basscake.

Set in stunning, desert surroundings, Dreambeach is a festival for those who seriously like the heat. The lineup is just as hot, with dozens of global dance acts such as Carl Cox, Chase and Status and David Guetta booked to perform.

Formally known as Gibraltar Music Festival, this year’s rocking event will be broadcast live on the famous MTV music channel, who are hosting the event. An announcement on some artists who will perform is due on Wednesday March 1, but previous stars have included Kings of Leon, Madness and Paloma Faith.

Tickets: To be released on Wednesday March 1

Summer may be out but the party does not end in Granada. The lineup for this big end of festival season bash is still to be finalised but those already confirmed include pop acts Lori Meyers and Ivan and psych-rock band Sidonie.