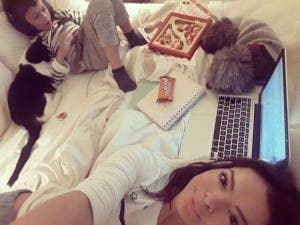 It doesn’t matter how much they dress February up in pink and red bows, and stamp love hearts all over it, it’s not fooling anyone: It really is the lousiest month of the year on the Costa del Sol. ?

Especially if you’re a freelance writer.

News is slow, events are scarce, the weather is frightful and clients are all recovering from holiday overspending and awaiting tourist season to bounce back, so getting paid is like drawing blood from a stone.

I began the year with the best of intentions, determined to put the wreckage of December’s floods behind me, and leapt into January with renewed zeal, embarking upon a mammoth list of New Year’s resolutions with dogged resolve.

I hit the ground running and charged through the month picking up a personal trainer, a string of new clients, an accountant, football and Jiu-Jitsu lessons for my Monkey, a web builder and a plethora of new routines, rules and resolutions.

By February though, enthusiasm on all fronts was waning.

Between the harrowing ordeal of Spanish paperwork and bureaucracy, and the frustration of dealing with ‘mañana syndrome’, I was ready to concede defeat and throw in the towel on my list of resolutions, when an old friend approached me for a favour.

A friend of hers, she told me, had a son, a recent English graduate, who was in search of an internship that would gain him a little insight into the ‘glamorous and exciting’ life as a freelance writer and journalist in Marbella… and she had thought of me.

There were paperwork and notebooks sprawled about my bed, coffee cups on every surface, one cat sashaying over the keyboard of my laptop, the other chewing on a power cable, the dog snoring loudly on my feet and the electronic beeping of the Monkey’s Minecraft game echoing around the room – and I envisaged a poor, unsuspecting graduate thrown into the melée.

Before I had time to describe the chaos, the noise, and the animals, it was agreed that he would shadow me and find out for himself how ‘glamorous’ freelance writer life is.

I met the intern in a café in Marbella – acknowledging that the commotion of ‘bed office’ in full swing would be terrifying enough to scare him away from a writing career forever.

He sat, fresh-faced and wide-eyed, clutching a notepad and eager to learn whatever wisdom I had to impart.

‘Firstly, do as I say, not as I do,’ I began, before embarking on a list of the hazards, drawbacks, triumphs of a life of freelance writing.

“Number one,” I said firmly, “Deadlines: these are what you live for. I cannot stress this enough. Always get ahead.

I continued, “Two. Write. All the time. Use every experience as inspiration for material.”

He scribbled furiously as I continued the list and then commenced his first task: My email inbox. “You have 537 unread emails,” he gasped, and I smiled in an attempt to hide my embarrassment.

“Begin with the most recent, and we’ll work backwards,” I instructed, burying my head in research for this afternoon’s interview.

“Umm… the first is from The Olive Press.”

He looked up at me with anticipation; “Your column is due… at midday today. Shall I send that now?”

I paused for a moment and sipped my coffee without raising my eyes from the cup “Yes,” I finally replied.

“Just as soon I’ve written it.”

He was quiet for a moment and then began hesitantly, “But I thought you said…”

“Deadlines, yes. Always get ahead!” I smiled, powering up the laptop and scanning my brain for whatever inspiration this month had offered me in the shape of material for a column,

“Do as I say, not as I do and you’ll be fine!” I finally smiled at him over the computer and he grinned at me with great amusement before tackling my entire inbox.

And with that, my new assistant was born, resolutions were resumed and, if I finish this now, deadlines were met!

The intern may well have salvaged February!