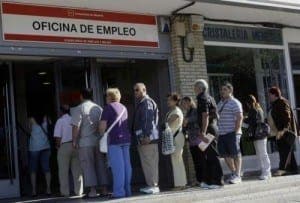 THE high rate of poverty across Spain has set alarm bells ringing in the EU.

Levels of poverty, inequality and social exclusion are ‘among the highest in the EU’, according to the European Commission’s Spain 2017 Report.

“The gap between the wealthiest 20% and the poorest 20% is one of the biggest in the Union, and it continues to rise” reads the report, published last week.

At 31.5%, Andalucia has the second-highest rate of unemployment in Europe, according to Eurostat figures.

The EC report praises the progress made in reducing jobless queues in Spain: 2016 saw an almost 10% drop in unemployment across the country.

However, it also highlights the problem of temporary employment, saying that 13.1% of Spanish employees are at risk of falling into poverty.

The influential Union UGT has recently complained that the majority of jobs found by the unemployed are under ‘precarious working conditions’, with just 4% of contracts both long-term and full-time.

The EC report also highlighted the fact that 27% of workers in Spain are on temporary contracts – the second-highest percentage in the EU, outdone only by Greece.