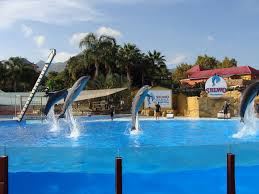 CAMPAIGNERS have reiterated their demand to free dolphins from a zoo.

Members of Resistancia Animal Malaga have announced a protest outside Selwo Marina in Benalmadena on May 13 from noon.

It is the second such protest to have been held by the group, whose aim is to put pressure on the park’s owners to close down the exhibit and remove them from the park.

It will coincide with dozens planned to be held on the same day around the world against the placing of dolphins and whales in captivity.