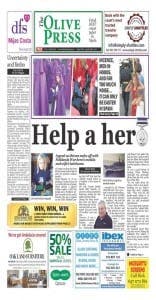 THE Olive Press has been named one of the best English news websites in Spain.

The best investigative newspaper in Andalucia was ranked fourth in the whole country by Feedspot, a global web content provider.

The Olive Press beat a host of English language publications including Costa Blanca News, The Leader, The Resident and Euro Weekly News, which did not even feature on the top 15 list.

The Olive Press website, which gets an average of 150,000 unique visitors a month, also ranked higher than the Daily Bulletin of Mallorca, where the Olive Press will launch a new edition on April 27.

Websites on the list were ranked according to their Google reputation and search ranking, influence and popularity on social media sites, the quality and consistency of articles and Feedspot’s editorial team and expert reviews.

Talking about the achievement, Jon Clarke, Olive Press publisher, said: “This is great news and testament to both the top-notch investigative reporting by our journalists and the quality of our website.”

“Coming fourth after a national newspaper, national press agency and a paper which has offices in a dozen countries is a fantastic achievement and one that we will seek to better next year.”