A BRITISH expat couple have transformed what was once a dilapidated row of commercial units into a thriving business hub. Livewires Chug and Karen – as they are known locally – first opened their shop Aladin La Cala in 2015. 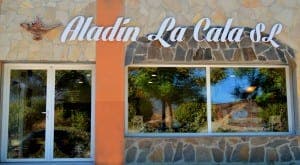 The one-of-a-kind second-hand shop created out of three empty units in the La Cala hills is now THE place-to-be for indoor furniture, as well as garden, lighting, kitchen, not to mention rugs, art, collectables and bric-à-brac.

But €500,000 of investment on and the whole line of units is now rented out – not to mention a cashpoint – creating a micro-climate of local commerce. “I am happy to say that all units are now being rented by trading businesses,” says Chug, “It’s remarkable, this was a run down plot with no doors or roofs, and now it’s buzzing!”

One of the recent additions is CK Removals, which can shift your household items from the UK to Spain as well as offering local deliveries. “It’s an exciting time for CK as new delivery vans have arrived and it’s really taking off,” explains Chug. Joining them is the new Oasis café, offering everything from Sunday lunch to fresh kebabs, but it’s the eatery’s fish and chips that brings the crowds, and it’s no wonder, with its chefs having been trained by Welsh chippy expert of 40 years Ken Jones.

Tenants Laura and Soli lived in the UK for six years before arriving in Mijas. “We love it here,” explains mother of-one Laura. “The area just keeps going up and up and Chug must take so much credit for what he has done.” Hardware store Taylor’s – described as the English version of a Chinese shop – and LFS Interiors, which sells beautiful bed linens and more with everything made in the UK, have also set up shop here.

“There’s a decent variety of things here now and a fantastic café to boot,” explains expat Susan Van Herbert, 87, who has been living in Mijas area for 30 years. “It is really coming up here and a friendly local community.”

And that is not the end of it. After launching a petition last year Chug and Karen are happy to announce that plans for a zebra crossing across the road to St Anthony’s College has finally been approved. “We will now be that much easier to reach,” explains Chug. Now the businessman, from the Midlands originally, is working hard on an application to launch a car boot sale on Sundays.

“The plan is to run them between 10am to 3pm from April to October and give some proceeds to cancer charity Cudeca,” he concludes. “We are just waiting on the town hall to finalise it all.” Anyone interested should give Aladin a call on 951 314 074.