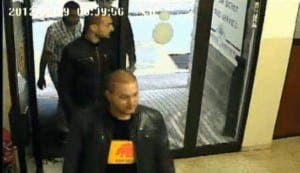 THE family of a murdered Briton have been given new hope as fresh CCTV footage has emerged.

Scotsman Craig Mallon, 26, from Coatbridge, was killed by a single punch outside a bar on the Costa Brava in 2012.

No one has been arrested for his murder while his family have been left frustrated by the lack of progress in the investigation.

But new CCTV footage, unveiled by a retired detective looking into the case, has given the Mallon’s hope of new leads.

Father to the chartered surveyor, Ian, said: “When he was out with his friends, if any argument broke out, Craig was always the peacemaker.

“One of the Scottish boys turned round and Craig was on the ground and he had been punched on the side of the head, and he was more or less dead.

“I just think that if it happened in this country, which it does happen, they’d be caught within 48 hours, 24 hours. It’s as if they just let it go.”

He told STV: “Craig was 26 years of age and had his full life ahead of him.

“And we just think he’s been taken away and it’s as if it was to brushed under the carpet.”

Spanish authorities have been accused of failing to conduct a proper investigation.

The retired detective superintendent on the case, David Swindle, said: “The fatal blow inflicted on Criag Mallon in front of numerous potential witnesses in a busy street I would have thought that would have been a simple investigation.

“The basic steps were not followed.”

The four French individuals pictured entering the local police station at around 6.40 am are believed to be key to the investigation.

Swindle added: “These are the four French people who hold the key to what happened to Craig Mallon. They were at the scene when the incident happened.

“They had their car towed away from a street behind the place where Craig was killed. Four French males, walking through that scene when the incident was started.

“It’s important that we trace these four people. And I’m sure that social media will drive this and we’ll eventually get there.”