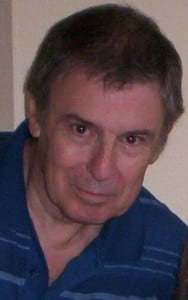 AN EXPAT has urged police to do more to help tourists who become victims of crime.

Ed Wilcox (right), who has lived in Duquesa since 1982, is appealing for more English-speaking officers to be recruited for the Costa del Sol.

Wilcox, a retired computer repairman, believes the number of English-speaking tourists justifies the majority of beat officers speaking the language.

His appeal comes after he was randomly asked to act as an interpreter in crime cases TWICE in two days.

Although only a passer-by he was firstly asked to help translate for a British family who had been burgled in the Los Hidalgos urbanisation last week.

“Both the local police and Guardia Civil were on hand and were very pleasant and efficient, but none of them was able to speak English so I was asked to translate,” said Wilcox, 75.

The next day he was dragged into another case after four Norwegians had their passports, and a laptop stolen from their car at Supersol, in Manilva.

“I know we’re in Spain but this area is benefiting from a tourist boom again and something needs to be done about the language problem.

“They need to employ translators like those that are available in hospitals.

“While the police are obliged to provide translators for court cases, they are not forced to provide one to victims of crime – it’s absolutely ridiculous.”

On a recent visit to Manilva Guardia Civil barracks, the Olive Press was brought in to translate for a tourist, who had had his wallet stolen, taking a full 30 minutes.

Malaga Police were contacted for a comment but have not yet replied.