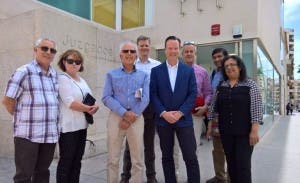 AN Andalucian law firm has won more than €2 million for clients suing banks for lost deposits this year.

Between January and May, CostaLuz Lawyers won 13 cases on behalf of British and Irish buyers, forcing six big Spanish banks – SGR, BBVA, Sabadell, Caixa, Banco Popular and Caja Rural – to pay out a total of €2,155,072.
That figure is before interest, which is still being determined.
One case alone saw a €958,000 payout, plus interest.

Keith Rule, from the Cadiz company’s UK office said: “The wording of Spanish law LEY 57/1968 and the ruling made in respect of my own case opened the doors for those in similar situations to come forward and try to recoup their lost investment.

“It’s not a quick process, but it is possible to beat the banks and reclaim funds that were handed over in good faith, even if the transaction dates back many years.”

In one case, at La Reserva de Marbella, the homes had been built illegally, while another related to the Malaya political and planning corruption saga at Marbella’s local council.

“These successful judgements are making a huge difference to people’s lives. The stress associated with going through the process of losing so much money can never be taken away, but at least a ruling that the bank is required to pay back the money (plus interest) finally draws a line under the matter,” says Mr Rule.

“However, there’s more to it than simply getting people’s money back. The evolution of Spanish case law that we’re seeing is going a long way to restore faith in the Spanish property market.

“The Spanish judiciary is working hard to ensure that a system exists in which individuals’ rights are respected and that Spain is one of the safest countries in the world for the purchase of off-plan property.”