IT’S been one of Spain’s most popular tourist destinations for decades. And it’s easy to see why. The golden, gentle curl of its main beach, its nearby coves and its superb links to Palma and its airport make C’an Pastilla the ideal holiday spot. 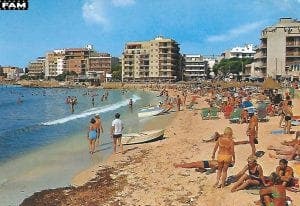 In fact, with the airport just a five-minute drive away, sun-seeking tourists can maximise every minute of a long weekend break away. But there is something else going on in this once sleepy fishing village.

With large-scale investment pouring into the Playa de Palma area, the place is becoming trendy again. “We have something incredible here,” said Engel & Völkers director Terence Panton. “We are close to the airport, a golf course, the beach and close to the capital of the Balearic Islands.” 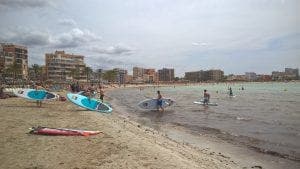 Where it once had its legendary Cockroach alley, now it has trendy new tapas bars and restaurants like Fins and Rumbo Fiso, with new hotels sprouting up by the month. Mass tourism first arrived here in the 1960s, when the first waves of British travellers began arriving at the resort. Becoming one of the island’s most popular resorts in the 1970s and 1980s, it was later overtaken by nearby S’Arenal and Magaluf, which were more specifically purpose-built for modern mass tourism.

It then went through something of a crisis of confidence a decade or two ago, but is now very much back and kicking, as locals and tourists alike realise what an interesting mix of buildings and residents it has.

Walking around its streets today is like a journey around the world, hearing different accents every 20 paces. No nationality dominates and there are equal numbers of Germans and English, with plenty of Scandinavian, Italian, as well as French and even Eastern Europeans. Few places better typify this than the legendary El Ancla bar, whose waitresses herald from Colombia, Romania, Morocco and good old Blighty, where owner Sue originally heralds.

C’an Pastilla’s metamorphosis into a family-friendly tourist town mirrors the extraordinary changes tourism brought to Spain. The arrival of wealth being the main one. In 1918, local businessman Bartolome Riutort built the Hotel C’an Pastilla, which the town takes its name from.

Aiming to develop the area, the tiny town began to take shape between 1920 and 1925. Riutort – after whom the town’s main street is named – persuaded local land- owners the Ripoll brothers – who ran the nearby Sa Torre Rodona finca – to give land to the Catholic Church to build a new place of worship. A 30-metres by 12-metres plot, situated where the town’s main square is, was earmarked. 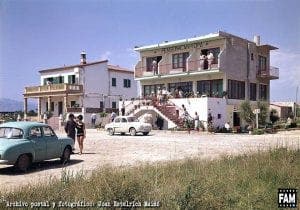 The land was then exchanged for a larger plot, measuring some 970 square metres, ample enough for a church and a rector’s house. On the feast of St. Anthony of Padua in 1927, Bishop Gabriel Llompart blessed and laid the foundation stone of the new church, San Antonio de la Playa. Although the main drag Avenida Bar- tolomé Riutort is bustling now, it wasn’t always like that, as local bar owner Lorenzo Bover says.

“Sixty or seventy years ago there was nothing here. Maybe only two or three houses on this street,” says Bover, who has run the family-owned Maracaibo restaurant for 44 years. “There was a lot of poverty. People worked in orchards. One of my grandfathers left for Cuba in the 1920s and the other for Argentina.” Things started to improve.

Following the laying of the first stone, donations from local parishioners and the canon allowed the building to grow. And as the church grew, so too did the town. Poverty remained a problem during the lean post-Civil War years, with many locals taking to smuggling contraband tobacco from Morocco, according to Bover. One of Playa de Palma’s oldest hotels, the San Francisco, was built in the 1950s as local tourism began to grow. But Riutort’s foundations really began to take shape during the 1960s, when the area boomed.

Hotels like the Alexandra, built in 1967, shot up bringing thousands of sun-seeking British holidaymakers to the resort. C’an Pastila’s proximity to the airport made it the ideal location for tourists landing in Palma, but as transport and road links around the island improved, visitors started venturing further afield. However, such is the area’s enduring popularity that the same visitors are seen year after year, as The Manchester Pub’s owners, the Hankes, know well.

“We’ve been here 34 years and you see the same people coming back year after year,” explains Tracey, who runs the pub with brother Darren and dad Ray. “It’s definitely going more upmarket now. A lot of hotels have been renovated. It’s also a very international resort.”

No doubt Riutort would rub his eyes in delight at the modern pastimes taking place in his beloved C’an Pastilla. Wind and kite-surfing are popular pastimes here, with the beach’s geometry making it perfect for watersports, as Bona ona worker Toni Rosabel explains. “The break points here are good for waves,” he said, predicting good surf conditions for the coming weekend. 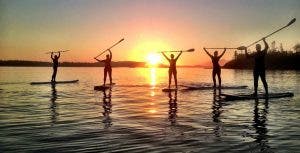 “We have surfers coming all year round and the island is a great spot for surfers in general.” The spectacular beach which connects onto Playa de Palma draws sunseekers from all over Europe, with British, German and Scandinavian holidaymakers. These days it is certainly a long way from fifty years previously, when locals would take intrepid tourists for a Lawrence of Arabia-style camel ride across the golden sands.

Next to it, the modern-day marina at Club Nautico San Antonio de la Playa, with its rows of sleek yachts bobbing in the harbour, nestles in between Cala Estancia and Playa de Palma. Although not quite on big brother Palma’s impressive scale, the boats on display, many of them locally owned, are – with the Club Maritimo bar offer- ing hearty fare for intrepid seafarers. For weary landlubbers, the mini train that runs along the promenade from C’an Pastilla to Arenal is the perfect way to spare aching joints. 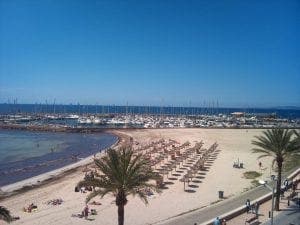 And for the more active, the superb cycle track that reaches down from C’an Pastilla to Palma attracts lycra-clad riders and day tourists out for a simple ride. A short walk from the port, you will find Palma Aquarium, the ideal day trip for all the family. Its Shark Vision Boat is not for the fainthearted. The see through-bottom vessel allows groups to admire the 11 sharks that swim in one of the aquarium’s pools.

On terra firma, you can get a better look of the sand tiger and sandbar sharks. And if that’s not close enough, you can watch one of the aquarium experts share interesting information about their fish while feeding them. If it’s more visceral water thrills you are after, nearby Arenal’s Aqualand is a water park where the kids will have a great time. So whether it’s on land or water, there is something for everyone at this ever popular coastal gem. 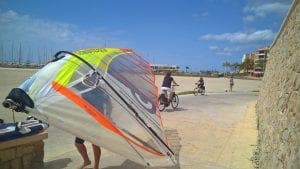 Alex Trelinski - 18 May, 2022 @ 15:45
A Mallorca woman lashed out at her husband on Tuesday morning for refusing to drive home because he had too much to drink. The man...

Spanish Registration & Qualifications, Why are they so important?