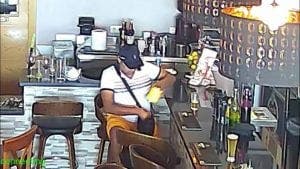 A THIEF has been caught on tape stealing a collection tin that was destined for a Mijas dog charity.

The unidentified individual can be seen stuffing the yellow tin into his bag at the bar at Bridges Bar in Mijas.

The chancer swiped the donations, destined for PADS, while punters were enjoying the charity’s monthly pub quiz.

Vice President of PADS (Protection of Animals Domestic), Steve Clarke, told the Olive Press: “It’s important to expose and catch him so he doesn’t do this again. 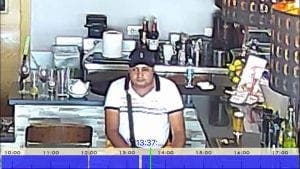 He added that his charity needs funds more now than ever after it was almost destroyed by the devastating floods in December.

“Every year it just gets harder and harder to raise money, and for him to do this during a fundraising event, it’s just shocking,” added Clarke, from Nottingham.

The bar owner says the man is not a regular.