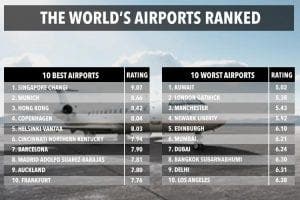 THE UK has three of the world’s worst airports, according to a new study.

London Gatwick has been ranked as the second-worst in the world after Kuwait.

The third-worst was Manchester, followed by Edinburgh at number five.

Flight compensation legal services company AirHelp ranked 76 airports by punctuality, quality and service, as well as the social media sentiment of over 130,000 tweets over three months of this year.

Malaga was not analysed in the study, while Palma de Mallorca was ranked 40th.