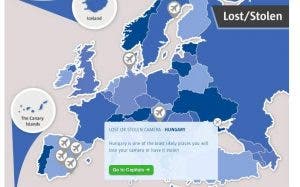 YOU are most likely to become ill or have your passport or money stolen when holidaying in Spain than anywhere else in Europe, according to new research.

The study has revealed that almost a quarter of all UK trips to the country end up in some kind of mishap.

It comes after comparethemarket.com created a ‘mishap map’ after polling 8,000 UK holidaymakers.

The research revealed that one in ten British jollies to Europe involved setbacks like illness, injury, or loss of theft or property.

Mainland Spain topped the chart for overall mishaps, followed by the Canary Islands, Greece, and Italy.

You are also most likely to lose or have property stolen in mainland Spain, ahead of the Canary Islands and France.

The mainland also topped the list of countries where people were most liable to fall ill, followed by the Canary Islands and Greece.

Head of Travel at comparethemarket.com Sam Grant said: “No one wants their holiday to be blighted by a mishap – big or small – so it’s always worth taking the necessary precautions.

“Keep an eye on your belongings, use a hotel safe and don’t fall asleep in the midday heat of the Spanish sun.

“Obviously some incidents are completely out of our hands, like flight issues, or getting ill. But it’s always sensible to ensure you have valid travel insurance so if the worst does happen, you’re covered.”

The full interactive map can be found on the Compare the Market website.