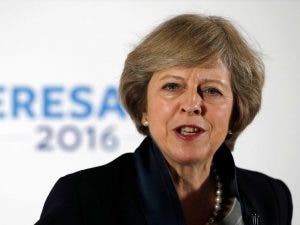 THERESA May has vowed that no EU national currently living in the UK will be made to leave on the day of Brexit.

The British Prime Minister told a European Council summit in Brussels yesterday that she wanted to offer ‘certainty’ to the roughly three million EU expats in the country.

While outlining her proposals, she made it clear that EU citizens will only be protected if the rights of British expats in the EU are also secured.

But in what could lead to clashes with the remaining 27 member states, the Tory leader also suggested she could set an early cut-off date for residency rights and rejected a Brussels demand for the European Court of Justice to retain powers to enforce rights post-Brexit.

Under her plans, EU nationals who have lived in the UK for five years by a specific cut-off date will be able to take up ‘settled status’, granting them rights to stay in the country and receive healthcare, education, welfare and pensions as if they were British citizens.

If they have not been in the country for five years, they will have the chance to stay on until they reach the five-year threshold.

Those arriving after the cut-off date but before the date of Brexit will have a ‘grace period’ – expected to be two years – within which to regularise their immigration status with a view to later seeking settled status.

The cut-off date has not been announced yet.

The system will also be streamlined, ridding of the current 85-page permanent residency application that has been widely criticised for its complexity.