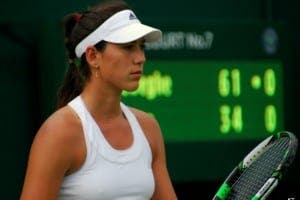 She is the first Spanish woman to win the title since 1994 and will take home £2.2 million.

It is her second Grand Slam title after winning the French Open last year.

The first set offered a tense match up, with Williams having two set points.

But after Muguruza, born in Caracas, took the set just two games later, Williams tailed off in the second.